Herman B Wells was Indiana University's eleventh president, and he significantly enhanced the university's international relations and international student population during his tenure. In 1949, Wells and several IU faculty members helped develop university-level training in Thailand. With the help of faculty member Leo Dowling, Wells established the first international center in 1951. Dowling had previously been appointed "counselor to foreign students" in 1943. Wells' international efforts are recognized in several ways, including a named Herman B Wells Professorship endowed by the classes of 1948 and 1950 to award faculty on the Bloomington campus "who embrace deep concern for the well-being of students and devotion to diversity, inclusion, and academic excellence." 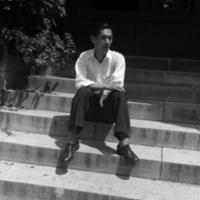 A Chinese student on the steps of Maxwell Hall in June 1943. 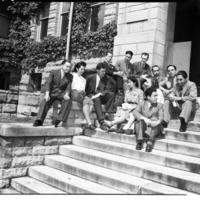 South American students sitting on the steps of a campus building in May 1945. 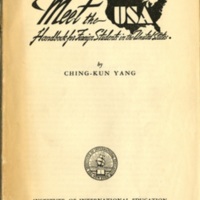 Meet the USA: Handbook for Foreign Students in the United States by Ching-Kun Yang. Published November 1, 1945. 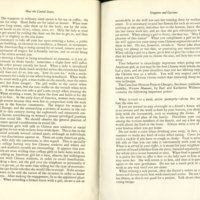 An excerpt from Meet the USA reads: "Your behavior is exceedingly important when when going out with an American girl, as you may be the first Chinese with whom she has ever had a date, and on your shoulders may rest her lifelong impression of the Chinese race as a whole. You will win respect and friendship when you use Chinese virtues rather than imitating cheap motion picture technique." 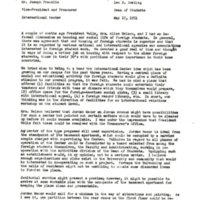 In this letter, Leo R. Dowling writes to IU Vice President and Treasurer Joseph Franklin about the logistics of converting Jordan Manor into an international center for students. 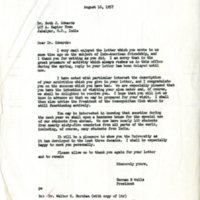 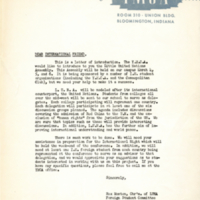 The chairman of the Little United Nations Assembly introduces the group and its work in this 1959 letter. 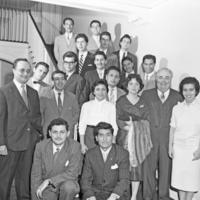 Herman B Wells photographed with Peruvian students in the President's house on March 3, 1959. 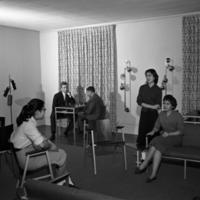 Students in the IU International Center on March 13, 1959. 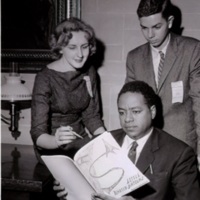 This photograph shows students at the Little United Nations Assembly on March 20, 1959. Students from many universities gathered at Indiana University for the event. 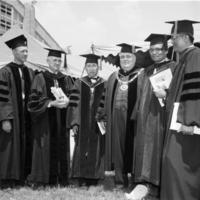