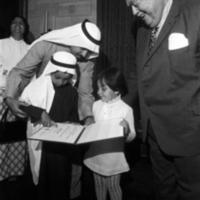 This caption for this image, which appeared in the September 1974 Indiana Alumni Magazine reads, in part: "Hasan M. AlJawadi, one of the first Saudi Arabian educators to enroll in a special program at IU Bloomington shows his Certificate of Attendance to his son Mustafa, 6, and daughter Hanadi, 4...Financed by the Saudi Arabian government, the program trains Saudi Arabian manpower to manage its own educational system." 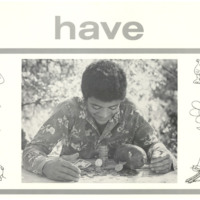 One of several language flashcards that were used to help international students and families learn English at Indiana University in the 1970s and 80s. 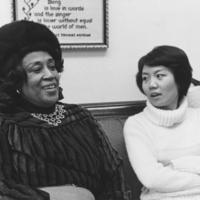 A December 10, 1981 IU News Bureau release included with this image reads, in part: "[Camilla] Williams, a voice teacher, has 'adopted' two students - - one from Taiwan and one from mainland China - - and half a world away from their homes, she has managed to doctor philosophical wounds with the love of music. Because of international tensions, students such as Shuang Wu from Peking, and Tzuoo Yun Tai, from Taipei, must measure their words carefully, Williams said." 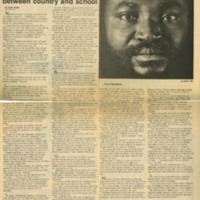 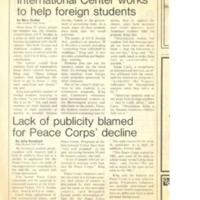 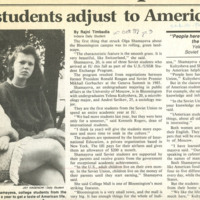 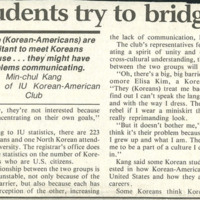 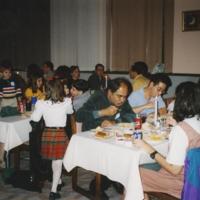 The International Friend Association's Thanksgiving dinner was an event open to any student who stayed in Bloomington over Thanksgiving. November 1997. 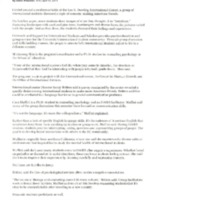 "Outreach and Support for International Students and Scholars (OASIS) provides psychoeducation and group services for the University's international student community. Through group discussion and skills building courses, the program aims to help international students adjust to life in a different country." 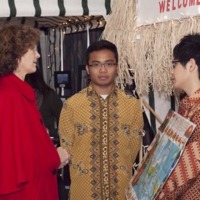 The IU World's Fare is the university's premier international event. This annual showcase of cultures from around the world allows you to taste foods and interact with cultural displays. Pictured here are two students with First Lady Laurie McRobbie on November 16, 2011. 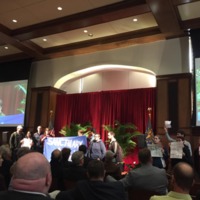 In March 2017, protestors disrupted what was an unrelated planned talk by Provost Lauren Robel to call for IU Bloomington to become a sanctuary campus for undocumented immigrants after Donald Trump's victory in the 2016 presidential election.