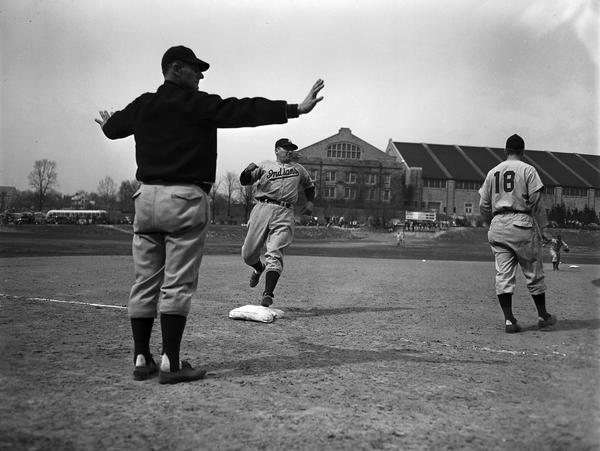 An Indianapolis Indians player is called safe in an exhibtion game against the Cincinnati Reds at Jordan Field, April 7, 1943. The Reds beat the Indians 8-6.

The advent of World War II significantly altered the lives of Americans across the country. Unable to avoid the conflicts befalling Europe and Asia, the nation was now a key partner in defeating the Axis powers.

Indiana University and the surrounding Bloomington community were not immune to the effects of global conflict brought by the war. Student lives changed as academic years were extended to three semesters to provide maximum education in a minimum time. To provide war weary civilians a break from the stresses of conflict, President Franklin Delano Roosevelt declared baseball essential to preserving morale on the home front. Wartime travel restrictions forced teams to curtail their spring training trips to warmer climates and practice closer to home. As a result, nine professional teams trained in Indiana from 1943 to 1945, with the major league Cincinnati Reds and minor league Indianapolis Indians both training on I.U.'s campus.

The impact of World War II on professional baseball has been well documented, with little emphasis on the collegiate level. Using an assortment of materials from Indiana University Archives, including photographs, Arbutus yearbooks, files from Herman B Wells' presidential collection, and manager's books containing newspaper clippings and box scores, this exhbit aims to use baseball to detail an aspect of the war's impact on I.U.'s campus.