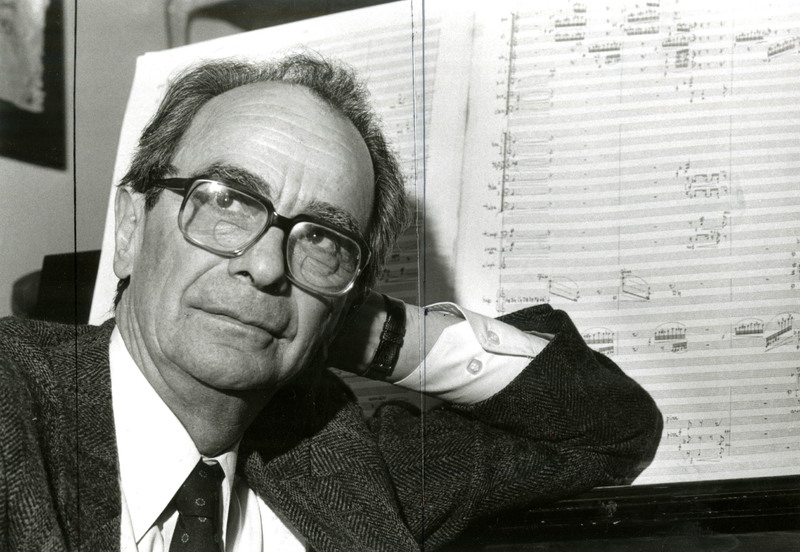 Juan Orrego-Salas, composer, scholar, and founder of the Latin American Music Center, was born in Santiago de Chile on January 18, 1919. He graduated from the Universidad de Chile in 1938, where he studied architecture, as well as piano and composition with Pedro Humberto Allende and Domingo Santa-Cruz. Upon graduation, Orrego-Salas taught music history at the Universidad de Chile and conducted the Coro de la Universidad Católica, of which he was the founder.

In 1944, aided by Rockefeller and Guggenheim grants, Orrego-Salas traveled to the United States in order to continue his studies in musicology, ethnomusicology, and composition at Columbia University and Princeton University. During this time, Orrego-Salas studied composition with Randall Thompson and Aaron Copland, as well as musicology with Paul Henry Lang and George Herzog.

Upon his return to Chile in 1947, he held several posts as music educator, editor of Revista Musical Chilena, music critic for El Mercurio, and music director. Chile remained his home until 1961, with the exception of a sojourn to the United States in 1954 during which Orrego-Salas premiered works at Tanglewood and presented a lecture series at Harvard titled “My Trip Through Music.” In 1961, Orrego-Salas moved permanently to the United States, where, on behalf of the Rockefeller Foundation, he became the founding director of the Latin American Music Center, while also teaching composition at Indiana University Jacobs School of Music in Bloomington, Indiana until his retirement in 1987. The Juan Orrego-Salas Scholarship Fund was established in 1994 to honor his illustrious career at Indiana University and it is awarded annually to composition students at Indiana University Jacobs School of Music.

Orrego-Salas has received many awards, including Chile’s Premio Nacional de Artes Musicales (1992), the Olga Cohen Prize (1956 and 1958), three Biennial Chilean Music Festival Awards, and the Premio Interamericano de Cultura “Gabriela Mistral” given by the Organization of American States (1988). Throughout his life, Orrego-Salas has been an avid advocate for Latin American music around the world. 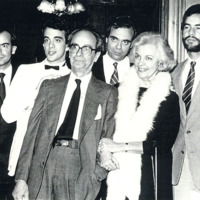 Orrego-Salas with his wife, Carmen Benavente (front), and their sons (back, left to right) Juan Felipe, Juan Matías, Juan Cristián, and Juan Miguel. Not pictured is their daughter, Francisca. 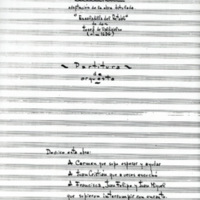 The dedication of the 1952 score for El retablo del rey pobre, op. 27 is dedicated to Orrego-Salas's family, as are many of his works. 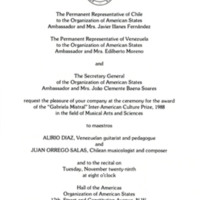 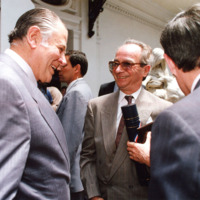 Orrego-Salas with the President of Chile, Patricio Aylwin, on the night he was presented with the Premio Nacional de Artes Musicales in 1992.

Listen to an Interview: