Into Battle No. 4: These are the Men

This film, written and narrated by poet Dylan Thomas, was produced by Strand Films. Strand employed Thomas to script several British propaganda films that were then released by the British Ministry of Information. "These Are the Men" takes Leni Riefenstahl's footage from the Nüremberg speeches of the Nazi Leaders and superimposes English "translations" over a set of orations in English "in which Hitler, Goebbels, Göering, Streicher and Hess report their sins and mistakes as frankly as if they were victims of one of those notorious 'confession drugs'." (Documentary News Letter, March 1943, 195.) 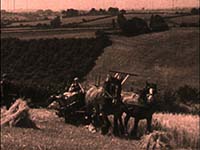