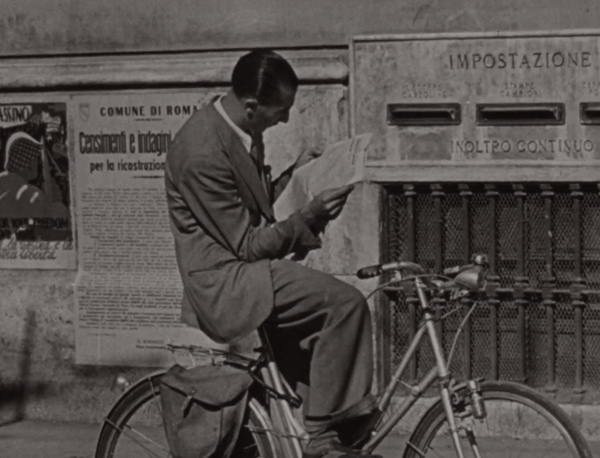 Reading newspapers was a regular activity in this period, even for this man keeping up to date on rebuilding news in post-World War II Italy.

The origin of The March of Time began with the founding of Time, the news magazine, in 1922 by co-founders Henry Luce and Briton Hadden. Luce and Hadden launched the magazine to fill a niche in the news marketplace not adequately served by other print news at the time. They saw a growing college-educated segment of the population increasingly too busy to keep abreast of daily news headlines, and their solution was to distill the news into digestible articles on a weekly basis. The hope was for a single article, referred to as a “story,”1 to contain everything a reader needs to know to make informed opinions on a topic.2 There were two keys to a successful Time story. First, a strong narrative was needed to convey authority.3 Additionally, staff utilized descriptive language to immerse readers into the surroundings or important individuals,4 aiming to, “...make our readers see and hear and even smell these people as part of a better understanding of their ideas.”5 Especially important for humanizing the magazine was the focus on individuals.6 Unique descriptives formed a distinct writing style compared to other magazines, as the New York Times explained in a later article on the magazine, “Public figures were beadyeyed, jut‐jawed, buck‐toothed, bumble‐headed, moose‐tall, haystack haired.”7 Time was also highly organized, with a distinct ordering of the news, a focus on national and international stories on business and politics, and inclusion of arts and culture.8 The newsmagazine launched its first issue on March 3, 1923, and quickly had a circulation of 12,000.9 By 1937, Time claimed a circulation of 1.7 million copies.10 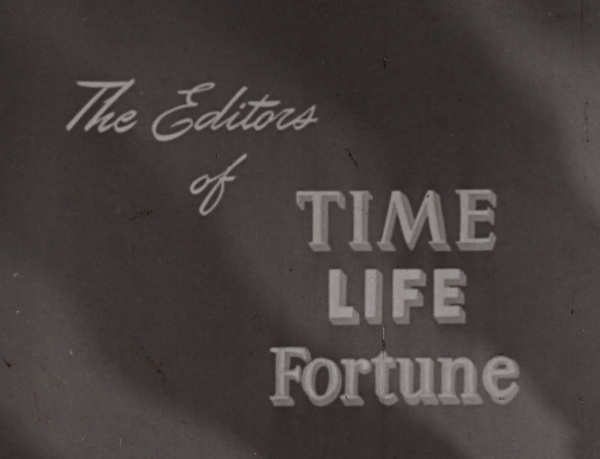 The March of Time films would often begin with marketing for other Time Inc. products, like this shot from a 1950 production.

With the success of the magazine, Time Inc. soon sought other media forms to expand the signature Time style of immersive, detailed news summary. From the beginning, Roy Larsen, the company’s business manager, involved himself with local radio stations to promote magazine subscriptions. First by producing a news quiz for New York’s WJZ radio station, and later by hiring Fred Smith of WLW in Cincinnati to write scripts for a news program called NewsCasting.11 The NewsCasting idea gave local stations free scripts to be read on air by local announcers in return for crediting the magazine. Smith and Larsen soon changed the format of NewsCasting to short disc recordings of news dramatizations, which were shipped to radio stations.12 Such programming was not uncommon at the time, with radio news ranging from local radio announcers directly reading newspapers over the air, to various forms of formal news programming like news dramatizations.13 News dramatizations involved a scripted depiction of a news story carefully voiced by actors. Meant to be taken seriously as news, scenes were often made up, reenacted, or otherwise creatively altered for heightened drama.14

Having an active hand already in creating news-related content for radio, Smith persuaded Larsen and Luce in 1931 to make a dedicated Time radio show.15 During this period, radio shows were generally not directly created by radio conglomerates, but instead made by advertising agencies which bought airtime in local markets. Following this model, Time’s ad agency Batten Barton Durstine & Osborn (BBDO) negotiated a deal with CBS for 30 minutes of airtime on friday nights at $4,200 per spot16 for a program called The March of Time.17 BBDO then looked for other sponsors to offset production costs, first finding the office supply company Remington Rand, famed for making typewriters, and later Wrigley chewing gum and appliance maker Servel Inc.18 The show changed to a 15 minute live program every weekday in 1935.19

This clip, from a later The March of Time production on radio, shows the stage production necessary for the live radio broadcast show Fibber McGee & Molly.

Production of the radio version of The March of Time involved considerable time and resources. In its attempts to portray authenticity in “re-enactments,”20 The radio show matched the voices of people in the news with paid actors, laboriously experimented with sound effects, and wrote and edited scripts to fit natural speech patterns.21 Yet claims of authenticity in broadcasts were debatable:

Despite claims that most dialogue was ‘verbatim’ and ‘based on verified quotations,’ dialogue, characters, and scenes were often pure invention. For example, in 1938 a British ship was torpedoed in the Mediterranean; everybody on board was killed, so no witnesses survived. Nonetheless, the producers invented a scene in which listeners could ‘hear’ the ship’s last moments through layers of sound effects, including sirens, explosions, and panicking crew members. To heighten the drama, the disaster is portrayed as the fictionalized last moments of the ship captain’s wife—we even learn her name was ‘Laura.’22

To further the mood of stories, live musical scores by an orchestra and sound effects were curated to fit the action. Always guiding the listener was narration by Westbrook Van Voorhis, known as “The Voice of Time” in both the radio program and film production.23 Creating each show was highly labor intensive, requiring anywhere from an estimated 240 to 1000 hours for each episode, and upwards of 13 hours of work each day per person.24

The production value paid off in listenership. Claims range from about nine million in 1932 to 38 million listeners in 1938.25 Even with a large audience, the value proposition for Time Inc. was contested. The company only made money indirectly from the radio show, through suggestively marketing the magazine to the audience and hoping for new Time or other subsidiary subscriptions.26 Although it appears this model did work, Luce was fearful of having to increase advertisement prices in Time during the economic instability of the Great Depression to help offset the high print runs.27 Luce looked for other sponsors to absorb production costs, and the show remained on the airwaves with only intermittent drops until cancellation in 1945.28 As will be shown, the film variant incorporated much from the radio version, once it appeared in movie theaters in 1935. 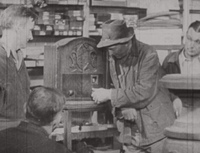 The radio was central in the American media landscape, as this shot from an installment on radio later detailed. 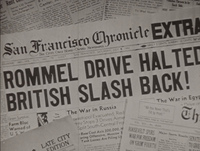 The later transition to film did not limit references to newspaper articles, like this one on the war in North Africa. 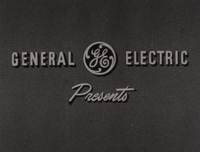 The quest for sponsorships would carry over to the film version of The March of Time, one installment being sponsored by General Electric. 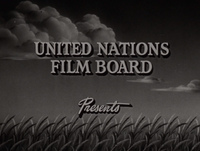 The March of Time found a sponsor in the United Nations Film Board to present a story on the Food and Agriculture Organization late in its run.