In this brief clip, pay attention to the narrator's word choice when describing China upon American entrance to trade market in the 1800s.

In The March of Time, a common political view spanned the series. While claiming to be unbiased, the content of the films generally align with Luce’s and Louis de Rochemont’s vision for America and the world. Critically viewing The March of Time reveals the championing of democratic and liberal capitalism along with American intervention in world affairs.78 The series routinely portrayed political movements at odds with the principles of limited government interference in business or lacking in the democratic process with skepticism. For example, The March of Time continuously showed fascism domestically and internationally in a negative light.79 The series also strongly encouraged American interventionism in world affairs, even before the start of World War II.80 Closely approaching, and after, the initiation of U.S. involvement in World War II, the series and company doubled down, turning towards an , “... increasingly propagandistic tone taken by Time Inc., publications….”81 The Soviet Union was spared from the worst of possible depictions, especially before and during the war. This is likely partially due to the mutual war effort between the countries. Time even named Stalin its Man of the Year twice in this span (1939 and 1942). Luce and the producers of The March of Time did not agree on everything. Luce, a prominent Republican donor,82 disliked New Deal policies, while de Rochemont is credited with approval for then-President Roosevelt’s programs. The disagreement may have contributed to the voicing of both side’s opinions on the matter.83 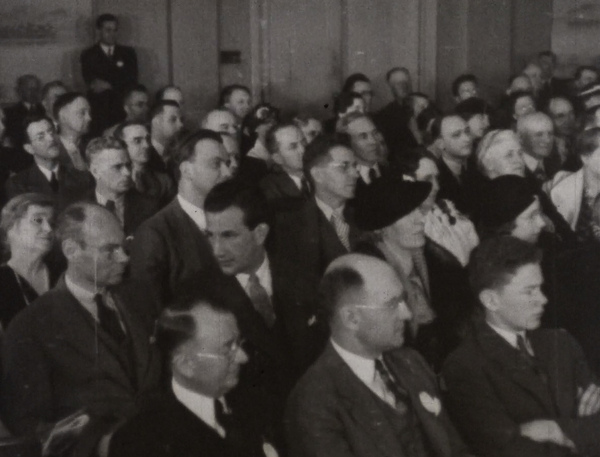 Whites were overwhelmingly represented in the series, especially in professional positions or positions of power, like this shot of social workers at a conference.

The Series exhibited ethnocentric views throughout its run. Language and visuals were selected to invoke in viewers a sense of superiority, a trend particularly evident in pieces on developing countries. The March of Time often depicted these cultures as exotic through images, narration, and even background music choice. The point of view for audience members was often as a tourist rather than a news listener. This was done through the inclusion of westernized individuals on screen with locals. One example of this is the addition of a woman in western dress examining the city of Bangkok and its locals, with the narrator explicitly stating the regular activity of tourists, “... poking their heads into the boat…,” for which the family resides.84 Unintendedly, this scene serves as a metaphor for Western colonization. Western living and involvement in these cultures were also routinely shown as bringing modern civilization to new lands, echoing the colonizing notion of white man’s burden – the task of bringing “civilization”(i.e., Western industry and customs) to seemingly less-developed peoples for which only Westerners could complete. Use of words like “natives,” “primitive,” “ancient,” and “rudimentary” described colonized countries.85 The March of Time expert Dr. Setliff points out one such instance of this in an issue of the series dedicated to portraying the then territory of Hawaii:

The film then discusses the discovery of the islands by British Captain James Cook. A shot of a statue of Cook identifies the Captain as the “Forerunner of Modern Civilization.” The implication here is obvious, an allusion to beliefs in the ‘white man’s burden’ that help animate the drive for colonization in the nineteenth century.86

Framing certain cultures as lesser and in need of Western industrialization furthered the cause of intervention by the United States in world affairs. 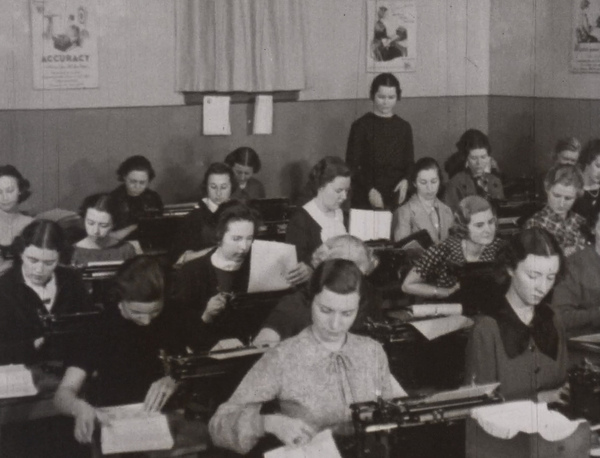 When discussing women, White women were usually the focus, like this shot of a secretarial school when dicussing working women.

Topics in The March of Time, especially ones on domestic affairs, focused on middle-class White males. Typical scenes on domestic topics, of both real footage and re-enactments, centered on White males, with minorities being non-existent in entire films87 or relegated to background roles.88 Segregation likely played a large contribution to the Whiteness of The March of Time films. The series did not survive long enough to witness a post-segregation America, ending a few years before the Brown v. Board of Education and over a decade before the Civil Rights Act of 1964 that outlawed racial discrimination. Thus during its years of production, The March of Time existed in a motion picture environment where, “African Americans were marginalized behind the camera, on screen, and in movie theater audiences.”89 Even in films specifically regarding racial harmony, depictions of non-Black groups are minimal. Take for example the 1944 release Americans All, a film dedicated to encouraging racial and religious harmony and equality for a united homefront during World War II. This film spent the majority of its 16 minute duration on the importance of Jewish, Protestant, Catholic, and southern Black equality, ignoring Asian and Latinx Americans among many other groups.90 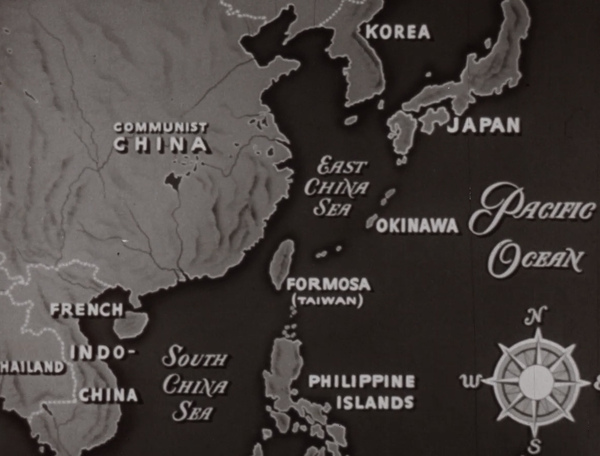 This map, shown in a 1951 production of the series, highlights the imperialist, Western, and American interpretations of the world. Notice the mention of "communist" just for China.

Moreover, The March of Time portrayals of Americans lacked the economic inequality apparent at the time. The Great Depression rocked America through the 1930s and early 1940s, creating high unemployment and poverty. The worst effects of which were hidden from the camera, and instead showed middle-class families, even when discussing dire circumstances.91 Images of families in their homes and wearing clean formal attire are included, instead of homelessness or the widespread building of makeshift shacks termed “Hoovervilles” after President Hoover. Causing this may have been the wanting to avoid turmoil within the U.S., and thus form the unity necessary for America to intervene in foreign affairs, “What began to emerge was a focus on national unity, traditional American values as defined by the middle class, and a sense of historical destiny for the United States as the guarantor of democratic ideas and free enterprise throughout the world.”92 A true representation of the American experience is not given in these films, but instead the limited view of the series’ creators. 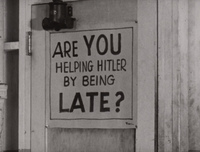 Time Inc. and The March of Time had an emphasis on private business practices, especially during the war. 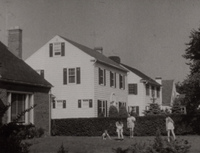 The suburbs were a frequent setting in The March of Time, especially after the war. This time Syracuse, New York, is portrayed. 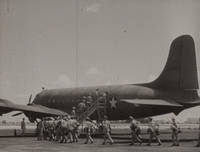 America's exceptionalism in military power, shown here through an Air Force cargo plane, was often highlighted in the series. 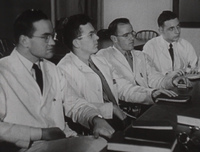 Males were highly represented in authority positions in the series, like this group of pediatricians listening to a lecture.