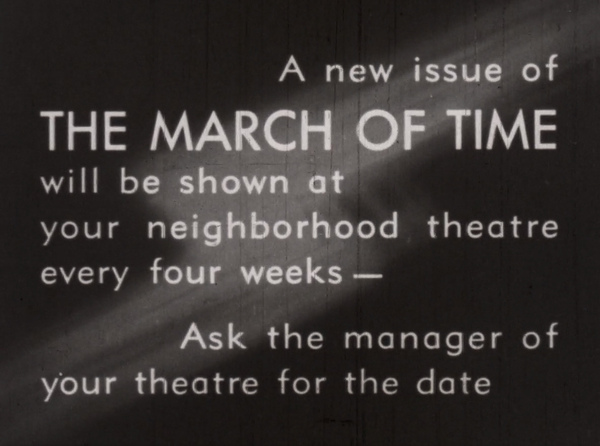 A notice shown at the end of issues in the series to gain a loyal following and guage public interest.

By the 1930s, Luce explored the use and innovation of photography and film in journalism. Moreover, Larsen had been planning a potential motion picture adaptation of The March of Time from 1931.29 The remaining piece for a venture into film was the right person with film experience to guide the project. This came in the form of Louis de Rochemont, an experienced film producer who worked on similar news motion picture projects, like the Columbia Pictures film series The March of the Years.,sup>30 Louis de Rochemont envisioned a newsreel-esque project that would provide in-depth focus on a few subjects with a combination of re-enactments and stock footage to supplement film directly shot in the field.31 The inclusion of stock footage was key as it limited the expensive practice of re-creation, which otherwise would have made the project too costly.32 Larsen and de Rochemont set to work creating a test film to show Luce and, with Luce’s approval, to the Time Inc. board of directors. The board agreed and gave de Rochemont and Larsen a sum of $200,000 to further experiment with the format.33 With money in hand, the two set up a studio on the second floor of 460 West 54th Street, and started examining news and archival footage. Three experimental films resulted and were screened internally, with footage eventually making its way into several released films. In 1934, with board approval, The March of Time was founded as a separate entity under Time Inc., serving as president and treasurer was Larsen while Louis de Rochemont became vice-president.34 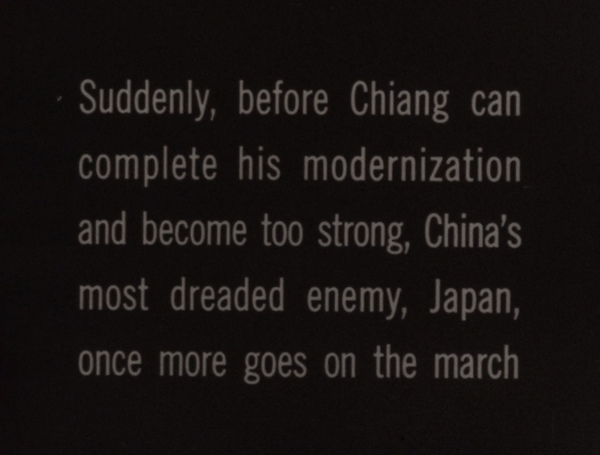 Text was also utilized to transition between abrupt changes in topic, like this example going from discussing China's development to war with Japan.

Like the radio show preceding it, the film adaptation included large budgets and high production value to dramatically portray stories. During just the first year, Time Inc. spent $900,000 in expenses for the project. This paid for 70 staff comprising camera operators, researchers, writers, and editors35 To fuel its need for stock footage of events and people across the globe, The March of Time frequently purchased existing footage from Fox Movietone, while amassing their own library of stock footage which eventually totaled over 10 million feet of film several years on.36 The investments into the series were necessary for de Rochemont and Larsen to improve on the standard newsreel format.

Newsreels were already a mainstay of movie theaters and contained a set of identifying characteristics mostly unchanged since their inception around 1910.37 Typical newsreels during this period lasted about eight to ten minutes.38 A single newsreel could abruptly flip from “hard” news items, like foreign politics or war, to “soft” items of interest, such as parades or beauty pageants.39 Showing the audience events was the primary concern, with virtually no analysis of impacts or importance.40 News items lacked connections, transitioning abruptly between entries and creating what Girona and Xifra call a, “... a potpourri of images and news which by no means offered a critical view of reality.”41 Having the latest news content was of high concern, with new creations going to theaters at least  once a week.42 When film on location could not be found, some newsreels did stage reproductions, inciting criticism from viewers.43 Overall, the genre proved to be quite popular with an estimated 90% of American cinemas in 1926 having newsreels shown before motion pictures.44 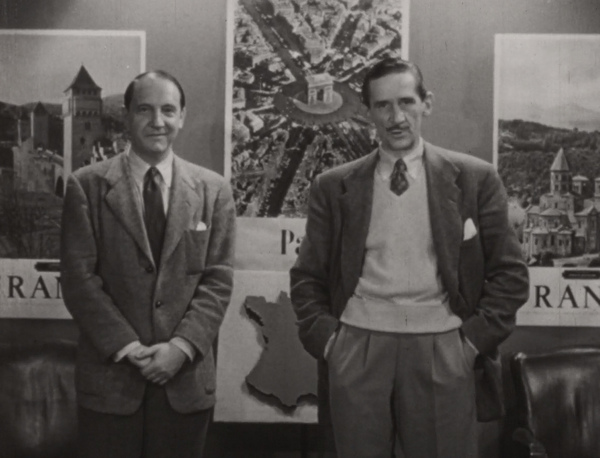 A rare sight, Westbrook Van Voorhis stands in front of the camera (right) with Jacques Fray.

Compared to newsreels at the time, The March of Time distinguished itself from the competition by combining elements of documentary filmmaking. To begin with, The March of Time dedicated more time to each story than traditional newsreels. This was done by increasing the duration of each film to about 20 minutes and by limiting the number of subjects examined.45 At first the series examined six stories, soon dropping to an average of three and eventually dedicating the entire length to explore a single issue.46 With the increased time per item, The March of Time was able to give audiences analysis of a topic rather than quick representations of events. The focus on fewer topics also led The March of Time away from the latest stories, the long established focus of newsreels, and towards examining larger issues of the period.47 Wanting to keep audience engagement and drama, the series had a higher reliance on re-enactments than newsreels.48 A narrator was used to guide the audience within and between stories for flow and heightened tension. The same Westbrook Van Voorhis from the radio broadcasts provided the narration for the film series, ending each film with the iconic words, “Time, marches on!”49 Production value was also far greater than newsreels, the longer length, greater depth, and increased use of staged content required more actors, fact checkers, researchers, and script writers. The March of Time even had original sound scores for heightened immersive experiences.50 Thus the budget Time Inc. allocated to the series exceeded traditional newsreels, ranging from about $25,000 to $75,000 per issue versus about $8,000 to $12,000 spent on each reel by newsreel companies.51 This unique blend of documentary, drama, and newsreel elements has been referred to by several names, including: “newsdarma,” “docudrama,” “news features,” “screen magazine,” and “news cinemagazines.”52

A common feature in The March of Time series was the use of maps, especially with changing features to convey important aspects of topics.

The March of Time became a can’t miss attraction for many moviegoers after its premiere on February 1, 1935. The series went from airing in 168 cities and 417 movie theaters around the United States to 5,000 movie theaters in 3,200 cities across the globe in 1936. That number jumped to around 11,000 theaters by 1938.53 Monthly viewership in the United States has been estimated at between 22 and 26 million.54 After the first year, the company changed distributors from First Division Pictures to RKO as the small First Division Pictures lacked the ability to satisfy a full release worldwide.55 The March of Time continued releasing issues to movie theaters and later special forum editions specifically for use in schools and public instructional settings until 1951. The over 200 films created by the series greatly influenced the United States and the world during the critical years of the Great Depression, World War II, and immediate post-war period.56 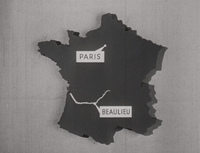 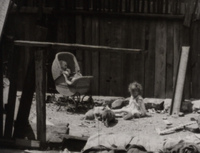 Provocative shots, like this one involving children and dogs outside a tenement, are hard to determine authenticity due to the frequent staging of shots. 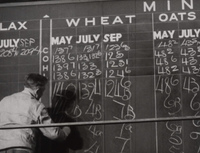 Economic worries, like the price of wheat on the Chicago Board of Exchange, were a major subject of study due to the era. 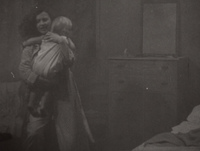 Dramatizations were frequent, like this family escaping an apartment building fire.