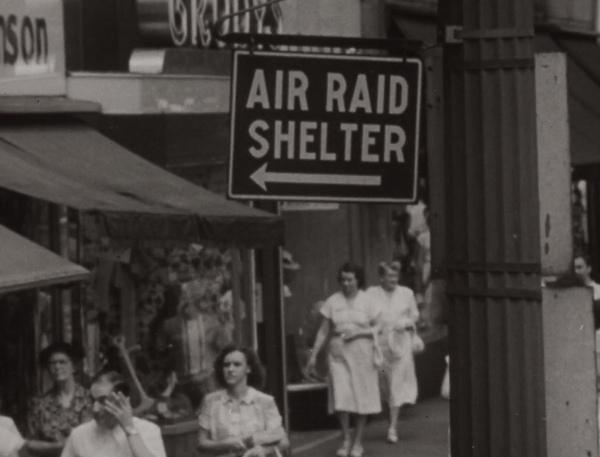 Discussions of even mundane topics included connections to war and alarm, like this image taken from an issue on two-way radio.

Drawing large crowds to theaters was vital to sustaining such a high cost production. To attract attention, The March of Time routinely picked controversial topics for analysis, abundant due to the times.57 Events shaping the United States and the world during the 1930s and 1940s were monumental, and led people to examine the fundamental principles of society. Years of economic difficulties from the Great Depression led Americans to debate business and work reform. The rise of communism and fascism in Europe also divided the American public, while declining diplomatic relations and rising military endeavors in Europe increasingly pressured America to pick sides. The March of Time discussed these issues at length, enticing controversy and drawing crowds along the way.

By presenting contentious topics, The March of Time risked backlash from the public, theaters, and government entities. Censorship was a continuous challenge for the series, even within its debut year. Challenges started with the second issue released in 1935 with a staged scene depicting Hitler, for which the Ontario Board of Censors challenged as inflammatory.58 This censorship proved to be far from the last. Internationally, The March of Time regularly faced censorship boards in Europe for, both, American made The March of Time films and content created directly for the European continent by a distinct branch of The March of Time headed by Louis de Rochemont’s brother, Richard de Rochemont.59 The series was even outright banned from Germany, Japan, Russia, Italy, and Spain for alleged unfair representations of their countries.60 Domestically, local censorship boards would target specific scenes or ban the playing of entire films, although sometimes relenting after public outcry.61 Occasionally, private film conglomerates would also refuse to show certain issues of the series in their theater chains due to potentially offending content.62 Lawsuits alleging libel and defamation by individuals depicted in the series were a regular occurrence, so commonplace that corporate lawyers from Time Inc. would watch every film before it was released.63 As a result, most lawsuits filed against the company were settled minimally or dropped.64 The frequent news of censorship towards the series helped fuel viewership as intrigued people came out to view the questioned content for themselves.65 Time Inc. fed off the controversy label, promoting their films as such to lure in audiences.66 Two of the most controversial films created by The March of Time were Inside Nazi Germany released in 1938 and The Ramparts We Watch from 1940. 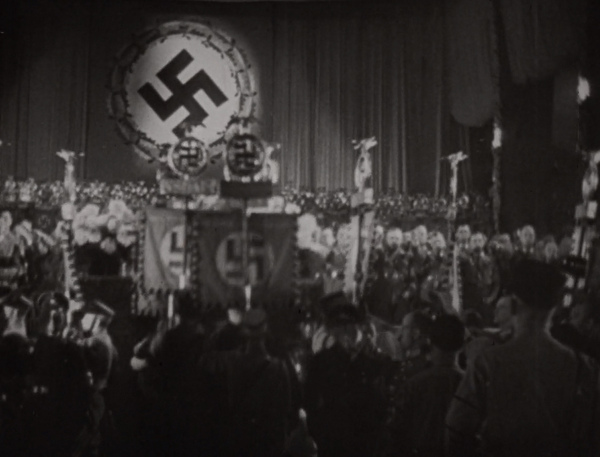 Before American involvement in World War II, images like this one from a film after the end of the war, would be avoided by American media.

Inside Nazi Germany premiered on January 20, 1938, at the Embassy Theatre in New York City to the disdain and intrigue of many. Raymond Fielding, an expert on The March of Time classified the film as, “... possibly the most politically controversial film in the history of the American cinema.”67 The fervor even included bomb threats to cinemas willing to show the production.68 This sixteen minute film spanning 1,457 feet even began with a notice warning viewers of the footage about to be seen:

THE ISSUE OF MARCH OF TIME YOU ARE ABOUT TO SEE HAS CAUSED MUCH CONTROVERSY. OUR POLICY IS TO FEARLESSLY PRESENT ANY WORTHY FILM RELEASED BY A RECOGNIZED AMERICAN PRODUCER. WE THEREFORE PRESENT UNCENSORED AND IMPARTIALLY THE FOLLOWING SUBJECT.69

The film examined Nazi Germany and glimpsed at the racial persecution of Jewish citizens, and was largely comprised of silent footage taken by Julien Bryan, a freelance photographer, when invited to Germany.70 Bryan gave Louis de Rochemont the material, and de Rochemont edited the footage, added some re-enactments to the piece (including a portrayal of Hitler), and created a script for narration. Besides being one of the few films willing to depict Hitler on screen,71 a topic avoided for strongly divided public opinion, the film received intense criticism from Nazi sympathizers and opposition due to the composition of the film. Expecting to see Nazi abuse from the hype surrounding the film, viewers saw less than anticipated, as Fielding summarized, “The visual, in itself, was politically neutral in its description of the Nazi regime – an almost flattering portrait of an efficient dictatorship whose subjects seemed pleased with their lot.”72 On the other hand, the narration framed the Nazis as a dangerous regime oppressing portions of their population.73 Consequently Inside Nazi Germany was labeled as both pro-Nazi and anti-Nazi by reviewers, largely depending on which sense factor impacted one the most.74 Some considered the offense taken by both sides as impartiality by the company.75 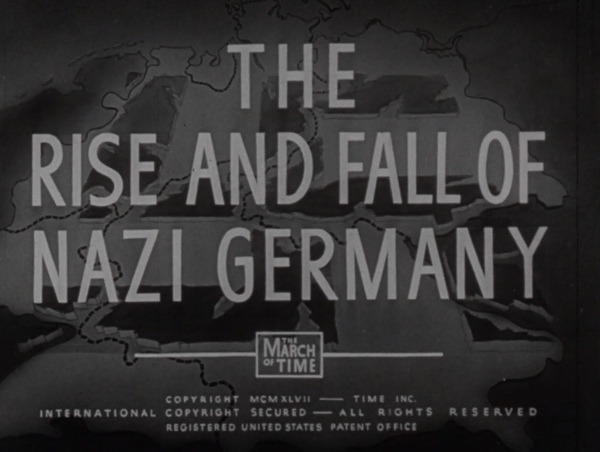 The Ramparts We Watch and Inside Nazi Germany would not be the last films on Nazi Germany, later issues dealt with direct World War II involvement.

Another highly controversial film from The March of Time was The Ramparts We Watch. In 1939, the year following the release of Inside Nazi Germany, de Rochemont again examined American foriegn policy and the Nazi government in Germany. The film was set in New London, Connecticut, in 1914, and centered around the depiction of American life and the eventual entrance of the United States in World War I through depictions of townspeople, their daily lives, and eventual entanglement in the war. The hesitation of entering the war was paralleled at the end of the film with the rise of Nazi Germany and the lack of response by America. During The March of Time’s filming for its first full-length production Germany and the Soviet Union invaded Poland, causing de Rochemont to implement several changes.76 Releasing the film proved contentious, with German sympathizers decrying the motion picture. The Ramparts We Watch was even outright banned in Philadelphia with influence from the American Nazi Party.77 The ability of the film to pursuade Americans to become interventionists is unknown, but the controversy surrounding it shows the deep divisions of the American public on Nazi Germany at the time.

Several dictators were examined by the series, including Josip Tito shown here in a later issue in 1950. 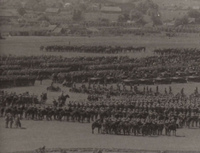 This shot shows Chinese military in formation as part of coverage with their war with Japan. 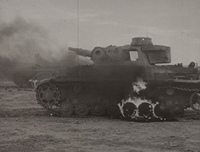 Burning tanks, like this one of German variety, made a regular appearance in war issues of the series. 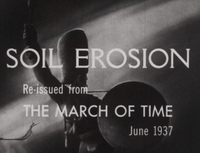 Some topics were decidedly less controversial, like this one on soil erosion from 1937.