Lori Marion, the eldest of the two little girls present in the series of home movies, donated her family’s collection of 35 8mm films shot between the mid 1950s and late 1960s to the IU Moving Image Archive at the beginning of 2021. The silent, Kodachrome movies show a collection of moments in time and follow Lori’s family through major life milestones, like the marriage of her parents, the purchase of their first home, and the early days of Lori’s life. They also show idyllic snapshots of birthday celebrations, summertime fishing trips in Minnesota and Canada, and a cross country vacation taken in the family Buick that brought Lori, her younger sister, and their parents all the way from their home in Illinois to Tijuana and back over the course of a month. 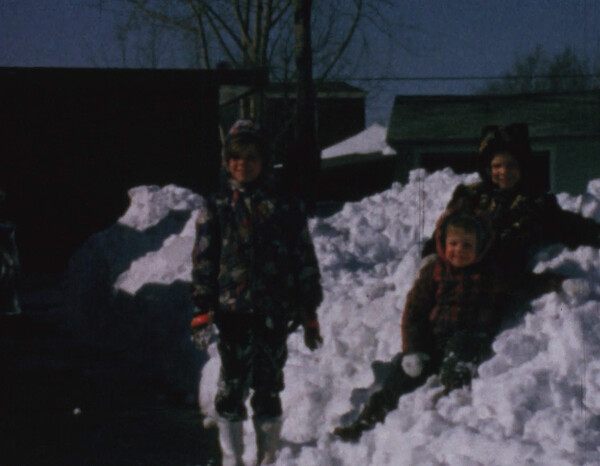 Lori and company after a snowstorm in 1967.

While investigating the collection, I had the opportunity to talk to Lori herself over the phone. At the end of our conversation, her voice rang out strong and bright: “It’s history,” she said, “the movies are history.”1 She was talking about the period captured in the films: the cars and the clothing, the landscapes, streets, and the characteristics of the places shown through the perspective of one person and their camera. Yet, I think she was talking about the personal history captured in the films, too—notable events like the winter snowstorm of 1967, and the day captured on the film titled “Thanksgiving,” in which Lori told me, the dishwasher overflowed and flooded the kitchen at the same exact time that the family dog was having puppies.1

A wedding kiss recorded by Lori Marion's father, an example of personal history in the home movies.

There is an interplay between public history and private history that is unique to the home movie’s placement in the archive.  As we watch a stranger’s collection of home movies, there is history we can observe and relate to without knowing the people on the screen. The views of Mount Rushmore, the trail signs in Yellowstone National Park, the rides at Disneyland all exist in a contextualized setting that we may have our own memories of and experiences with. At the same time, there is a personal history that we have no access to, which exists solely in the memories of the people captured in the films. For example, I would have had no idea about the “Thanksgiving” events if not for Lori telling me about them over the phone.

Bringing the home movie from the private space out into the public can not only give us insight into the lives of “ordinary people” but can also help us foster connections to one another.2-4 While it is essential to consider how systemic social and cultural hierarchies influence the definition of “ordinary” in a particular time and place, there is something to be said for the essential value of the home movie as a snapshot of one person’s life in time. Home movies do not give us pictures of history as things were objectively, but rather, they offer versions of history specific to particular people. They are brief snapshots that tell the story of what was important to someone, what they chose to capture in the moment, and as viewers, we get the opportunity to connect and bring to life those moments through our own experience.2

Lori and her sibling checking out the family Buick before embarking on their cross-country roadtrip. 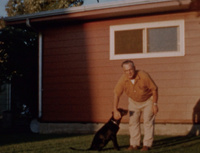 Marion family member and dog at a house party. 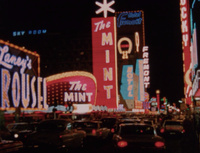 The Las Vegas Strip as recorded by the Marion Family while adventuring. 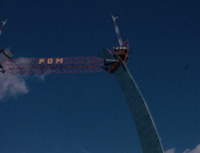 The St. Louis Arch was still under construction when the Marion Family passed by during their travels.

Whose lens Are We Looking Through? →
The Lori Marion Home Movies