A Snapshot into Amateur Filmmaking

On the phone, Lori Marion explained to me that her father always had a camera in his hand, and that he was “meticulous” about dating and organizing their home-movies.1 His eye for creating innovative ways to contextualize the filmed events is particularly evident in the family’s travel movies.

An added transition by Lori's father to the home movie "Milwaukee Zoo".

For example, “Lori Marion #1” begins with Lori standing beside her father as he holds a poster with cutout bubble letters that read, “California Vacation June 19, 1965.” He then presumably returns to wielding the camera and begins to pan shots of the family Buick, their mode of transportation for the vacation ahead, which will take them from their home in Illinois all the way to Baja California, Mexico, and back. Throughout the travel films, he makes a point of filming state welcome signs and other geographical markers, which help situate the films, especially for viewers in an archive who do not hold personal memories of the vacation. One interesting feature about this home movie collection is the presence of premade titles, which Lori’s father spliced onto some of the reels to add contextualization. These may have been used with a “Brownie Movie Titler Outfit” and a Kodak title sheet. In an email, Lori told me that her dad had, “some type of film editor and a splicer,” and that she imagined he might have used those to add the introductions onto the films.1 The introductions offer a fascinating window into early D-I-Y contextualization techniques. In these little introductions, we can also see moving image embodiments of some of the home movie techniques suggested in Eastman Kodak’s How to Make Good Home Movies.11 For example, an animation method using blocks and exposure technique described in the Eastman Kodak book is illustrated in the title sequence of “May First Pictures, Lori Pollack 1960.”

"Cooling Off" is one example of inventive title creation without sound.

The efforts put into editing and creating titles, for Lori’s father, was in service to showing the films to friends and relatives. In our phone conversation, Lori described the practice of her father converting the garage into a projection room to periodically show the family’s movies off to neighbors. The setting up of projectors and home movie viewing rooms has been described as a ritual by film scholar Fred Camper.12 With the focus on sharing, home-movies can be analyzed as cultural precursors to social media sites like Instagram, Facebook, and Youtube, making them invaluable in the study of the human relationship to communication technology in the United States. 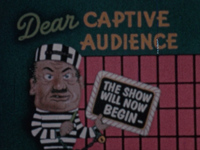 Lori's father added this image to the beginning of a home movie for audience amusement. 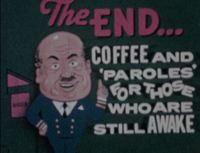 This image was added at the end of the same home movie to complete a funny prisoner theme. 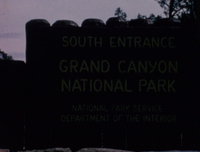 Signs like this one greeting visitors to the Grand Canyon are used by Lori's father as transitions in several home movies.

This illistration from the Eastman Kodak Company's How to Make Good Home Movies encourages amateurs to record naturally occurring signs to use as transitions and context.