Polka Dottie involvement on the show often revolved around her appearance, like this song which Rootie asks the question, "ain't she sweet?"

Rootie Kazootie encouraged traditional gender roles through its characters on screen and its licensed merchandise. The main two puppets, Rootie and Polka Dottie dominated children’s attention and branded merchandise. On the show, Polka Dottie often found herself in trouble and in need of Rootie’s protection and help from his magical kazoo. Perpetuating dependence on males, a reinforced gender role displayed frequently on television shows during this time34 and common in the traditional gender roles of the period. Other Polka Dottie content centered on songs or comments about her looks, like the clip to the left. Some diologue by Polka Dottie even bluntly directed females to traditional roles, as her expressing the abrupt need to return to the kitchen at the end of the video to the right.

Clothing choices for the two puppets also reflected gender separation and traditional gender ideals. Rootie was shown wearing a baseball outfit, encouraging boys to pursue outdoor play activities, while Polka Dottie always maintained a clean polka-dot dress. Even the patterns on the clothing reinforced a gender dichotomy, with stripes on Rootie and polka-dots forming all of Polka Dottie’s clothes and even her name. The seemingly simple differences between lines and circles, show real preferences in gendered settings.35 Perhaps the clearest sign of supporting traditional gender norms was the licensed merchandise, with official Polka Dottie scarves and costume jewelry marketed towards girl “rooters”, while boys were pictured emulating Rootie with the signature Rootie cap.36 This is not uncommon as children, “... identify with same-sex media characters….”37

In the larger picture, highly gendered television has been shown to lead to reproducing these values in audiences, especially concerning due to the young age of Rootie Kazootie viewers. Consuming media has been linked to creating or reinforcing gender roles in relation to the programs consumed.38 Moreover, children are believed to be particularly vulnerable to these messages.39 Pre-1980s television has also been found to have the highest levels of female stereotyping in programming, reflecting the larger television programming environment surrounding the show.40 The study of gendered images on television is a continuing concern in the modern era, as viewing habits evolve to include internet-based options. 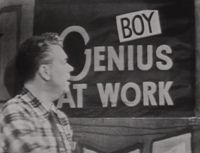 This curtain was frequent for set, costume, or puppet changes. 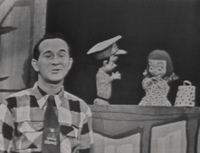 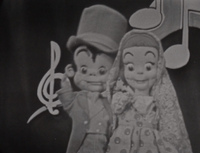 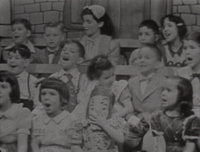 This audience shot shows one young viewer with a signature Polka Dottie Mask.