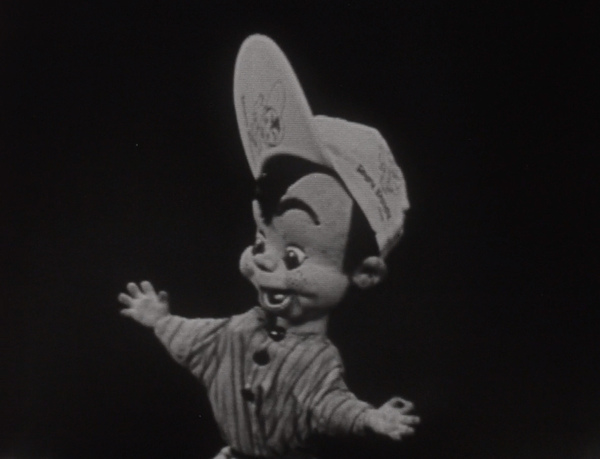 Rootie Kazootie (often shortened to Rootie), the titular main character of the show, is a boy genius and a baseball player. The latter inspired his signature look which consists of a pinstripe baseball uniform and a very particularly worn baseball cap. The bill of the cap is upturned, revealing an image of Rootie Kazootie, and is worn slightly askew. Rootie Kazootie also possesses a magical kazoo (referred to as a “Kazootie”) often used to play pranks to the delight of the live audience or solve problems. He has a girlfriend, Polka Dottie, and a dog, Little Nipper/Gala Poochie Pup. Every week Rootie and Big Todd go on adventures with their friends and stop Poison Zoomack/Zanzibou from stealing Rootie's magic Kazootie. The show’s producer, Steve Carlin, pointed to a visit to Ebbets Field to watch the Dodgers play for the creation of the name Rootie, “In fact I went to Ebbets Field and saw what was going on and there was a lot of rooting, a lot of this, a lot of that. And I thought ‘... the name of this puppet should be Rootie’....”15 Rootie and the rest of the puppets were handmade by Paul Ashley, who was also the puppeteer for Rootie.16 Naomi Lewis separately provided the voice of Rootie.17 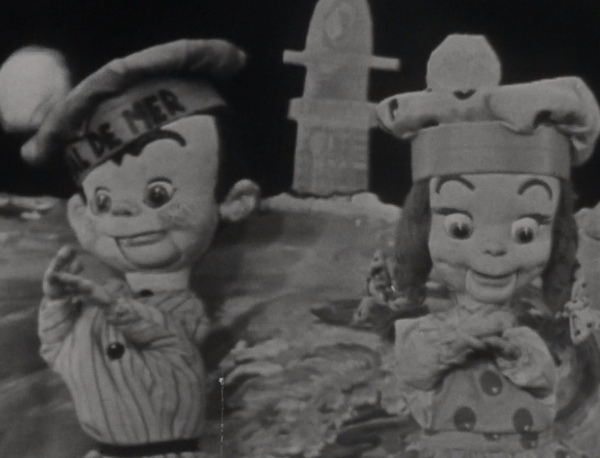 Rootie and Polka Dottie dressed as sailors. Even her sailor uniform had her signature double polka-dots.

Polka Dottie is Rootie's girlfriend. She has red hair, done up in braids, and wears a pink polka-dotted dress. In fact, she is obsessed with polka-dots, “All her clothes are full of polka-dots, she lives in a polka-dotted house, grows polka-dotted flowers, and even eats polka-dotted cookies.”18 Her love of polka dots is embodied in her special, official polka-dots, which, “... consists of a small polka dot inside the big polka dot.”19 Polka Dottie and Rootie Kazootie, both voiced by Naomi Lewis, fit together well, with her high pitched voice complementing Rootie's nasally tones. 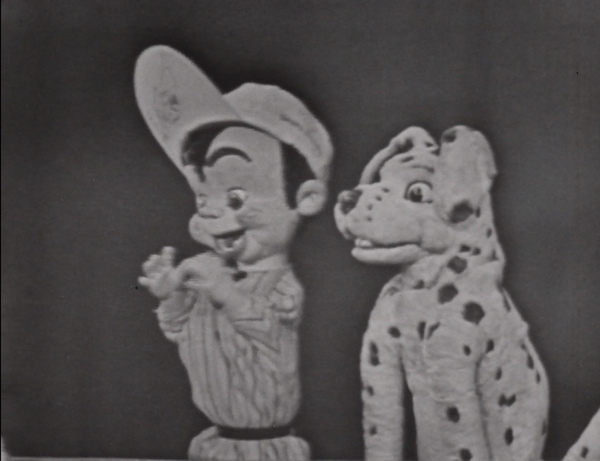 Gala Poochie Pup was often seen with Rootie, as only he could understand the puppy's barks.

Gala Poochie Pup is Rootie's pet dog and faithful sidekick. Frank Milano voiced Gala Poochie's distinct barking. Two of Poochie Pup’s main activities on the show are losing fights to cats, which earn him black eyes, and being involved in the audience quiz.20 The original name for the canine companion was Little Nipper, a name tied to the corporate sponsor RCA. The company had a successful advertising campaign based on a 1899 painting of a family dog named Little Nipper listening to a phonograph.21 When RCA dropped the sponsorship, the show was forced to change the puppet pupper’s name.22 Later statements by show producer Steve Carlin claimed that the character was based on the dalmatian dog breed,23 which would be contrary to the Little Nipper terrier-mix.24 Gala Poochie Pup can understand English, but communicates only through high-pitched barking, or “dog talk'' that Rootie Kazootie can comprehend and translate to the other characters and the audience. Luckily Rootie Kazootie invented a translator, the “talkamajig”, for Gala Poochie Pup during his run for congress. The dog's campaign slogan was, ‘what this country needs is a good five-cent dog biscuit,'25 Gala Poochie also had an elaborate backstory added after the name change, which involved a quest to be a television actor through imitating animal and object noises; ending with a job offer after leading a swarm of mosquitoes away from his town and into New Jersey!26

El Squeako Mouse shown here after colliding with a cake.

El Squeako Mouse, voiced by Naomi Lewis, is one of Rootie's friends. He wears a green and white striped sweater and lives underground. Before finding Rootie Kazootie and the rest of the gang, El Squeako Mouse gained fame in Mexico as a great cat-fighter. He was termed a  “Catador,”27 a play on the concept of a bull-fighting matador. El Squeako Mouse’s fame was substantial, “... in places like Mexico City he is a great public figure, living only in the mouse-holes of the very best hotels."28 El Squeako Mouse talks in squeaks, which have to be translated to barks by Gala Poochie. In turn, Gala Poochie can only be understood by Rootie, meaning all three characters usually appear on screen together. El Squeako Mouse and Gala Poochie commonly fight, frequently leaving Gala Poochie with a black eye. 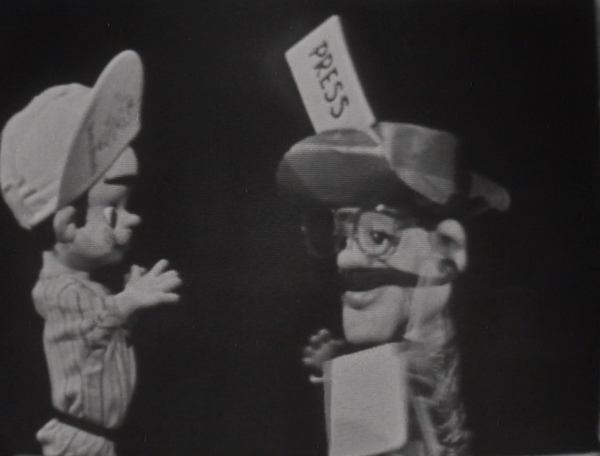 Poison Zanzibou (previously called Poison Zoomack) is the mustachioed villain of the show that was voiced by Frank Milano. He wears a top hat and black cape, which complement his mischievous mustache. Poison Zanzibou often tries to steal Rootie Kazootie's magic Kazootie and Polka Dottie’s polka-dots through hijinks and clever disguises, but the live studio audience always warns Rootie just in time for his plans to be foiled. The name change on this character was allegedly due to the use of the term “Zoomack'' by a candy maker, “Poison Zoomack, which I had to change because in the middle of the country somebody was selling Zoomacks – it was a little chocolate wafer – and he called me up and he said, ‘ you’re gonna ruin my business’. He said, ‘Who is gonna buy a Zoomack…’ .”29 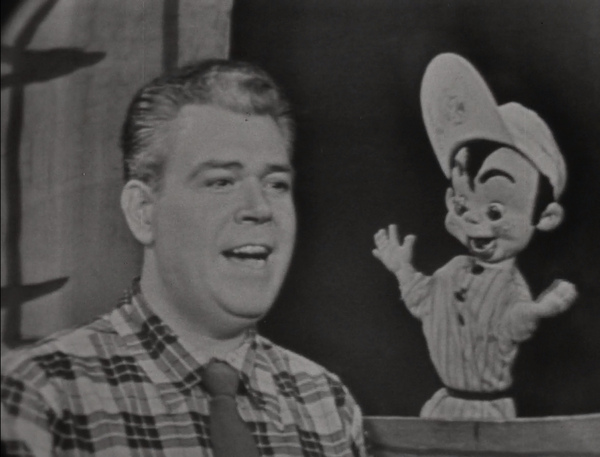 Big Todd chatting with Rootie, a common opening to episodes.

Todd Russell, known as Big Todd, is the host of Rootie Kazootie and Rootie's friend. He helps Rootie in his adventures and sings songs with the club members and the audience. He regularly wears button down shirts, often with casual and silly ties. Big Todd earned the nickname “materootie of ceremonies,”30 a play on the term “master of ceremonies”, for regularly introducing characters on screen, progressing storylines, starting the show, and providing breaks to corporate sponsorships. 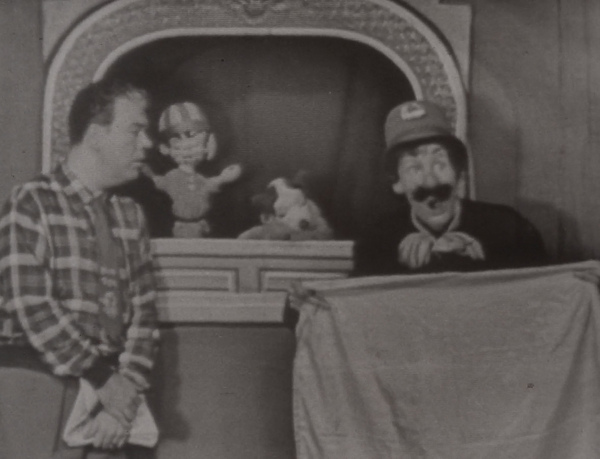 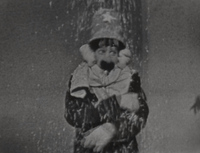 Mr. Deetle Dootle kepts the hat even while freezing at the North Pole. 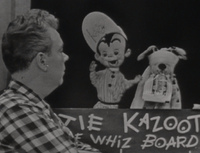 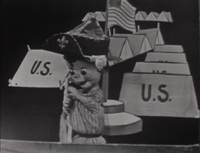 Rootie joins the Army in one episode, and his costume even includes a rifle. 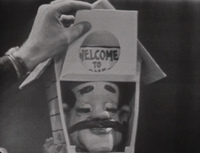