Frink's Work as Photographer During WWII

Still photographs taken by Frink during his time in the Office of War Information are available through archives such as the United Nations Relieve and Rehabilitation Administration and the National Holocaust Museum. Below are a selection of digitized WWII photos, primarily of the resettlement of displaced people.[UA1]

• Poles at the UNRRA center at Hohenfels

• Poles repairing shoes at the UNRRA assembly center at Hohenfels

• A stone Quarry and rock crusher worked by 40 Polish volunteers.

• Sara Neumann carries her luggage labled with an address in New York as she leaves Deggendorf.

More photos available by request through the Library of Congress.

While on his tour of duty, Frink took a small ethnographic survey of music from the Gold Coast (Ghana).

• The Frink and Alberts Gold Coast of West Africa Recordings

As part of the work he did for the Office for War Information, Frink's work as a photographer was noted in a multi-part report on Psychological Warfare in the Mediterranean and the History of the U. S. Constabulary 10 Jan 46 - 31 Dec 46 (APO 757).

• Frink During the War

• Frink After the War

Though Maurice M. Frink does not seem to have a public obituary, he is mentioned in his second wife's obituaries.

The Elkhart County Historical Society retains Frink correspondences between Maurice and Blanche between 1986 and 2003. 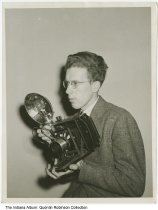 ← About Maurice Frink
Bibliography →
Frink's Work as Photographer During WWII