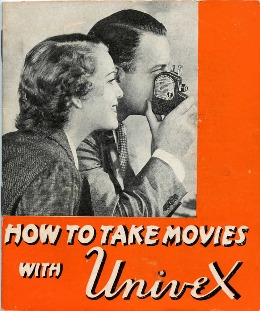 The Universal Camera Corporation was founded in 1932 with sheer ambition. Otto W. Githens, a fledgling businessman with a couple of failed ventures under his belt, and Jacob J. Shapiro, experienced in public relations and sales, decided they could produce a still camera cheaper than Kodak's own Brownie No. 0, priced at just $1.50. They just had one problem, they didn't know anything about camera design or manufacturing. They found a way around this "small" problem by duping a benevolent plastic's company, Norton Laboratories, into drawing up designs for a camera, which Universal quickly stole and manufactured before any patents on the design could be made. This transgression turned into the UniveX Model A, sold for 39 cents, and became a massive success.

It wouldn't be until 1936 that Universal sought to continue their low-budget, mass market strategy in the movie camera market. With a cunning designer on board, George Kende, Universal would manufacture the UniveX Model A-8 Ciné Camera and P-8 Projector. Listed for a mere $9.95, the camera was a runaway success, even forcing Universal to postpone an extensive holiday advertising campaign in order to fill demand. The UniveX Model C-8, a close descendent of their initial A-8, featured below in the collection, was introduced at the 1939-40 World's Fair, advertised as the "World's Fair Ciné 8 Camera." 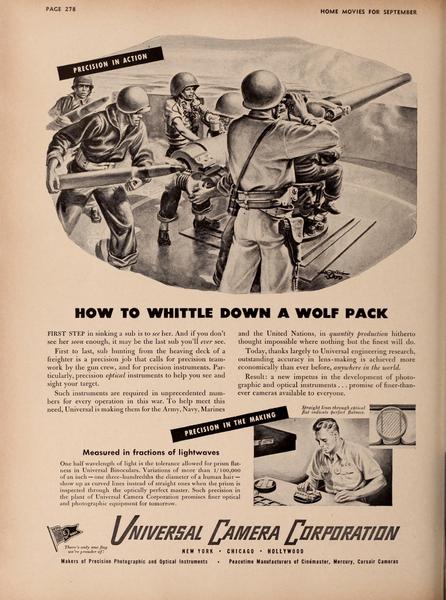 Wartime advertisement in the Sept. 1943 issue of "Home Movies" magazine

Just before WWII Universal introduced their Cinémaster line, including the D-8 "Standard," E-8 "Special," and F-8 "Jewel." However, WWII meant Universal, like many other amateur cinema companies, would convert their production lines to support the war effort, and on January 1, 1942, Universal secured a contract to provide binoculars to U.S. and Allied forces. This advertisement from Home Movies magazine claims they made "precision optical instruments" for the Army, Navy, Marines, and the United Nations. The ad queries what the first step in whittling down a German U-boat wolf pack should be - seeing it first, of course, with Universal's precision binoculars.

With the end of WWII Universal sought to jump back into the market quickly and refresh their Cinémaster line with minor modifications from prewar models. The Cinémaster II Model G-8 is one such camera, showcased below in the collection. It was essentially the prewar F-8 model with minor modifications and new branding. Universal's final movie camera released in 1951 was the H-8 model, but few went into production. A series of unfortunate events, including a crippling strike against local die-casting shops, which shut down a major supplier for Universal, would significantly contribute to the company's demise in 1960. This luckless time period also saw the downfall of two other major motion picture companies, Revere and Keystone. Regardless of their fate though, the Universal Camera Corporation opened up the field of amateur filmmaking to thousands of people who might never have had the chance. 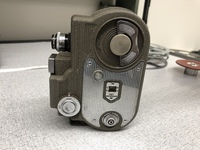