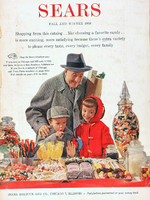 Rather than design and build a camera from scratch, Sears, Roebuck and Co. opted to rely on the Revere Camera Company to manufacture their 8mm Tower series cameras, but they weren't shy about that fact. In the Fall and Winter 1956/57 Sears catalog they proudly claim, "Tower 8mm Movie Cameras are made for Sears by the Revere Camera Company... one of America's largest and most respected makers of movie equipment... packed with costly features but priced far below comparable cameras." Revere already had a proven reputation for creating compact, reliable, and easy-to-use cameras, and if you look closely you'll notice they didn't have to recreate the wheel for Sears, only modify their own designs. The Revere Eight Model 84, also in the Alan Lewis Collection, bears a striking reselmblence to the 8mm Tower series and was produced at the same time. 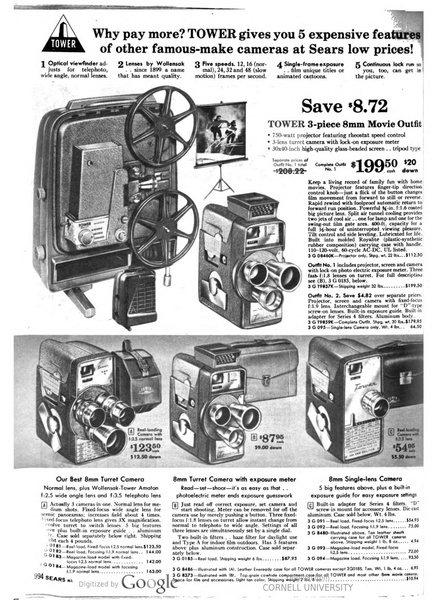 However, the Tower brand wasn't only restricted to motion picture cameras. Surrounding the Tower 8mm camera advertisements in the Fall and Winter 1958 Sears catalog are a plethora of motion picture accessories you might expect, including projectors and editors, but also a range of products you might not consider. The Tower label also found its way onto still cameras, film, photo enlargers, and slide projectors, which still aren't too far afield, but keep flipping the pages and it ends up on binoculars, filing cabinets, and floor safes.

Their motion picture products were also paired with more well known brands in combination packages. For example, if you didn't want an 8mm Tower camera, but fancied their projecter, you might go in for their "Tower-Kodak 4-piece 8mm Outfit," which came with a Tower projector, Kodak Brownie f/2.3 camera, Mansfield Twin-lens Turret, and leather carrying case.

The two Tower cameras in the Alan Lewis Collection essentially represent the entirety of their lineup, a single lens model and turret variation. These cameras came with various options, including either magazine or spool film loading, fixed or focused lenses, and with various lens speeds. Both cameras are made of die-cast aluminum with a light gray "crackle finish." 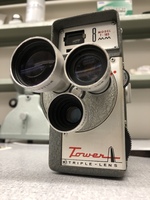