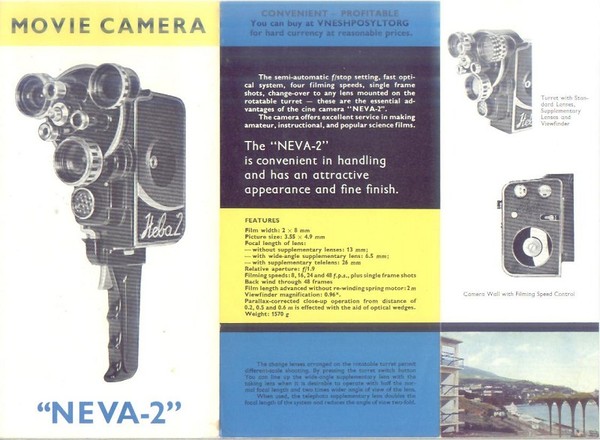 One of the rarest and only Russian camera in the Alan Lewis Collection, the Neva-2, was produced by the Leningradskoye Optiko-Mekhanichesko Obyedineniye (Leningrad Optical-Mechanical Association), or simply LOMO, from 1963-1968. LOMO was originally founded as the Russian Optical and Mechanical Company in 1914, and later renamed the State Optical-Mechanical Factory (GOMZ) in the 1930s. The company focused on optical equipment and camera production, best known for their popular still cameras, such as the Fotokor, Lubitel, and Smena series. 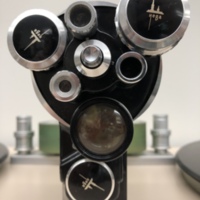 The Neva-2 is an 8mm turret camera with 6.5mm, 13mm, and 26mm lenses. It has variable film speeds of 8, 16, 24, 48 fps, as well as single frame capability, and can back wind through 48 frames. It weighs 1,570 grams. The camera comes in a leather carrying case with various accessories, including 3 lens hoods, leather handle strap, 1" telephoto to auxillary lens, cleaning brush, 5 lens filters in a plastic tube, pistol grip, and winding lever. 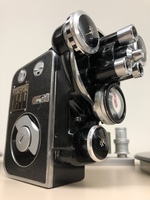