Beginning in the 1890s, female Indiana University students would hold a costume party known as the “Panthygatric” in early spring.  It is believed that this tradition stemmed from a late nineteenth century incident.  The male students put together an event called the “Fraternity Pan-Hellenic dance.” After dates had been invited, for some reason it was decided that the dance be for men only.  In response the women then put on their own dance, the “Panthygatric,” in order to “spite fraternity men.”  According a February 29, 1908 article in the Indiana Daily Student, the men’s dance ended up not going forward, while the women’s dance was a great success; “the result was that the girls enjoyed themselves, while the fellows roamed the streets,--and Bloomington was not dry in the nineties."

The Panthygatric dance involved toasts, speeches and costumes, often of a comic nature.  It was attended by female students, faculty wives, and the dean of women.  According to Thomas D. Clark’s chronicle of the University, one dean of women described the Panthygatric as an “annual feast of cold beans, ham, and pumpkin pie.”  The social event seems to have been popular with IU women, providing them with a creative outlet and their own social space.   In 1906, however, the dance was crashed by some of the male students, causing a bit of a campus scandal.  Several male students were caught peeking through the windows.  Although they were quickly turned away, the minor incident ballooned into a larger scandal during the following days.  An article came out in the April 16, 1906 Indiana Daily Student facetiously claiming that the men had witnessed a wild salacious affair.  The author likened the scene to that of “an Egyptian Harem,” in which the sorority girls, some scantily dressed, came as “knights, fencing girls, pages and Amazon warriors; many of the girls wore dress suits; some represented broken-down sports in flashy male attire; others appeared in the costume of gentlemen of the sixteenth century; there were ballet dancers, athletes and statesmen, rough-riders and negro attendants.”

Although the editors of the Daily Student claimed the article was intended to be read as an imaginative joke, at the time it was viewed by many as an attempt to damage the reputations of the female attendees.   A letter to the editor appeared two days later, condemning the women for their alleged behavior: “it surpasses my imagination to think of a plausible excuse for girls, respectable girls in an institution like Indiana University, to dress up in men’s clothing, or worse, and gather together for a boisterous night, such as was indulged in last Saturday.”  The writer concluded the letter by stating: “feminine modesty should cause them to think a long time before committing such an offense against society, and the University.”  These accusations provoked a response from Dr. Mary Bidwell Breed, dean of women, in the next day’s paper: "In my opinion, the annual Panthygatric has always been one of the pleasantest and most innocent amusements which the girls of the University have.  Any reports that make it appear otherwise have been based either upon falsehood or upon pure imagination.  The dance last Saturday was a delightful affair marred only by one attempt on the part of some men to open a window and peer in."

As a result of this controversy, the editors of the Indiana Daily Student were asked to resign for allowing the outlandish account of the Panthygatric to be published.  Although the editors admitted their account was fictitious, and claimed that they believed it would be interpreted as such by readers, the chaos stirred up by the article caused their termination.   This incident was not forgotten.  The 1912 Arbutus amusingly asserted: “The Panthygatric is for the young women exclusively.  The young men would like to attend but many of them do not.”

Following the 1912 references, there are no written accounts in the following years in prominent IU publications relating to the Panthygatric.  It is likely that as social norms relaxed, co-ed dances may have become preferable to students. 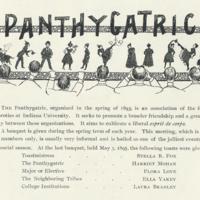 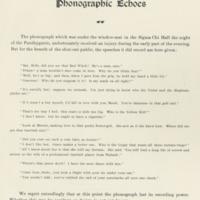